Performance analysis of wireless networks requires a set of modeling assumptions which describe — in a simplified manner — the behavior of the system and its environment. Two important modeling issues are the spatial distribution of devices and their mobility. Unfortunately, real-world data is difficult to obtain from network operators and often has a low spatial resolution. Hence, a common approach is to employ synthetic models resembling the behavior of real mobile entities. Devices are typically placed randomly in a given system area and then move according to a random mobility model.

The vast majority of publications uses a homogeneous distribution over the system area for initial placement of devices. “In some cases, however, researchers want to to use an inhomogeneous random distribution, modeling the fact that devices are concentrated in hotspots, such as buildings, malls, and pedestrian zones. Despite this demand, our research community lacks a commonly accepted approach to generate such inhomogeneities,” Christian Bettstetter says. The goal of his research is to fill this gap and come up with models that enable fellow researchers to easily use inhomogeneous distributions with well-defined stochastic properties. Bettstetter and his team thus propose a method that creates inhomogeneous node distributions by the concept of “thinning” known in spatial statistics. This approach is flexible, yet simple to implement and not restricted to certain scenarios; most important, it allows to compute the distribution of the nearest neighbor distance, an important property in any spatial distribution. Furthermore, the question as to how we should quantify the level of inhomogeneity was addressed. His team proposed measures for the level of inhomogeneity and assessed them by human perception of inhomogeneous node patterns. 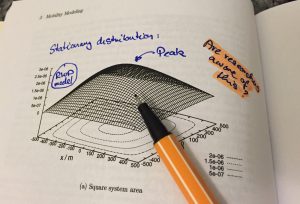 Another important aspect in simulations of wireless networks is mobility modeling. Some years ago, almost every simulation-based work on ad hoc networks, i.e., several hundreds of papers, used the random waypoint (RWP) mobility model. “We discovered that the behavior of this model is not well understood in the research community, but it bears pitfalls that might lead to misinterpretation of simulation results,” Bettstetter argues. Most notably, the probability density of a node location suffers from transient effects and is nonuniform. This fact motivated him to analyze in detail stochastic properties of the RWP model and related models using methods from stochastic geometry. Together with researchers from Pisa and NEC Heidelberg, he derived expressions for the stationary spatial node distribution, movement epoch length between two waypoints, the direction angle at the beginning of a movement transition, and the cell change rate if the RWP model is used in a cellular network. These results made the community aware of the RWP pitfalls and inspired several other researchers to work on the same topic, leading to many publications on the RWP model and its alternatives. These insights are important for researchers and developers to obtain meaningful simulation results.