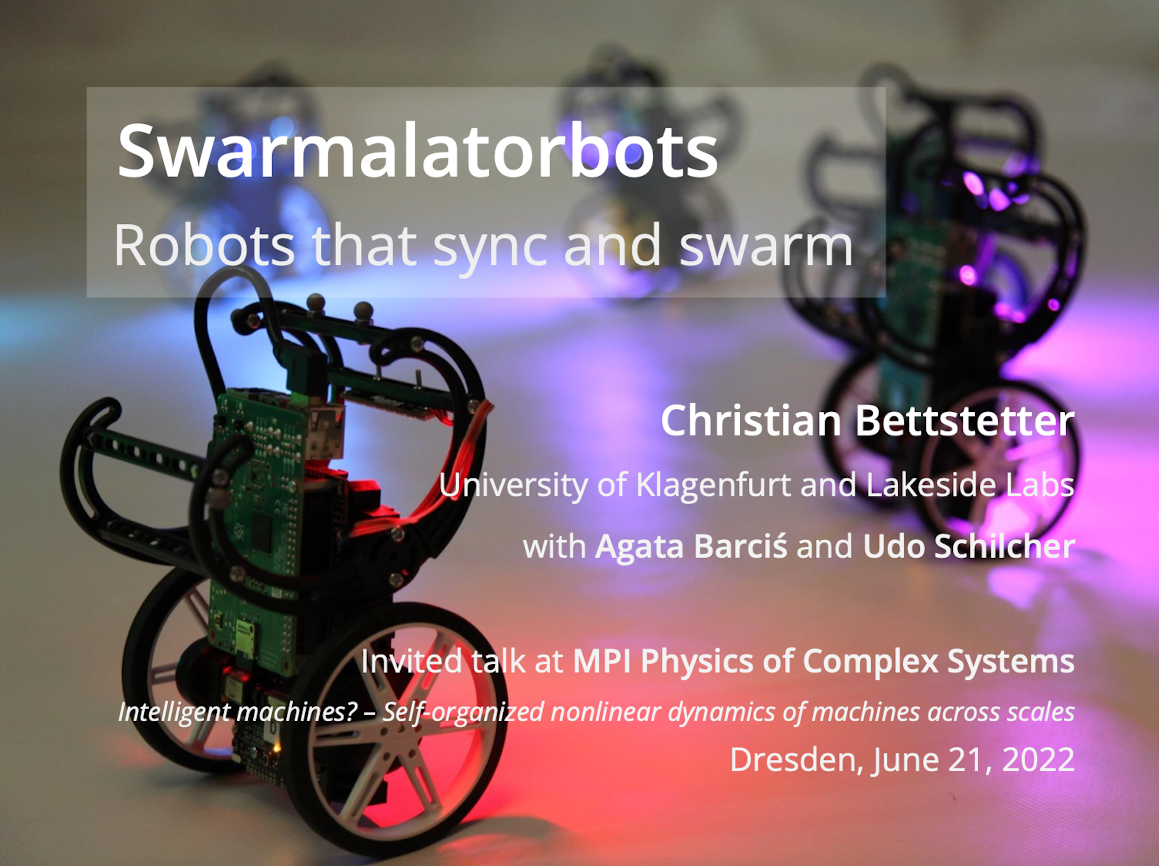 Invited talk “Swarmalatorbots: Robots that sync and swarm” at the MPI for the Physics of Complex Systems (2022) 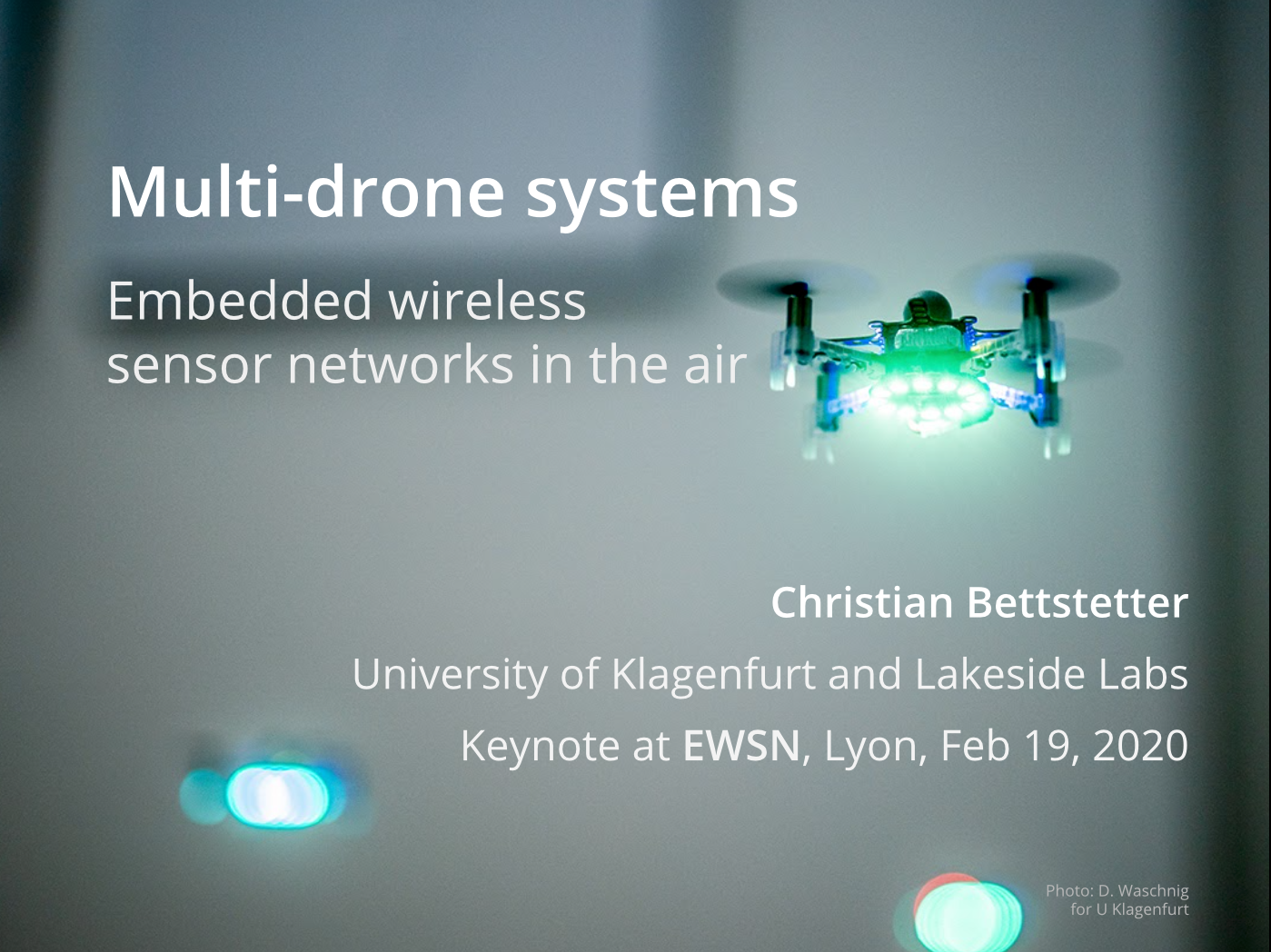 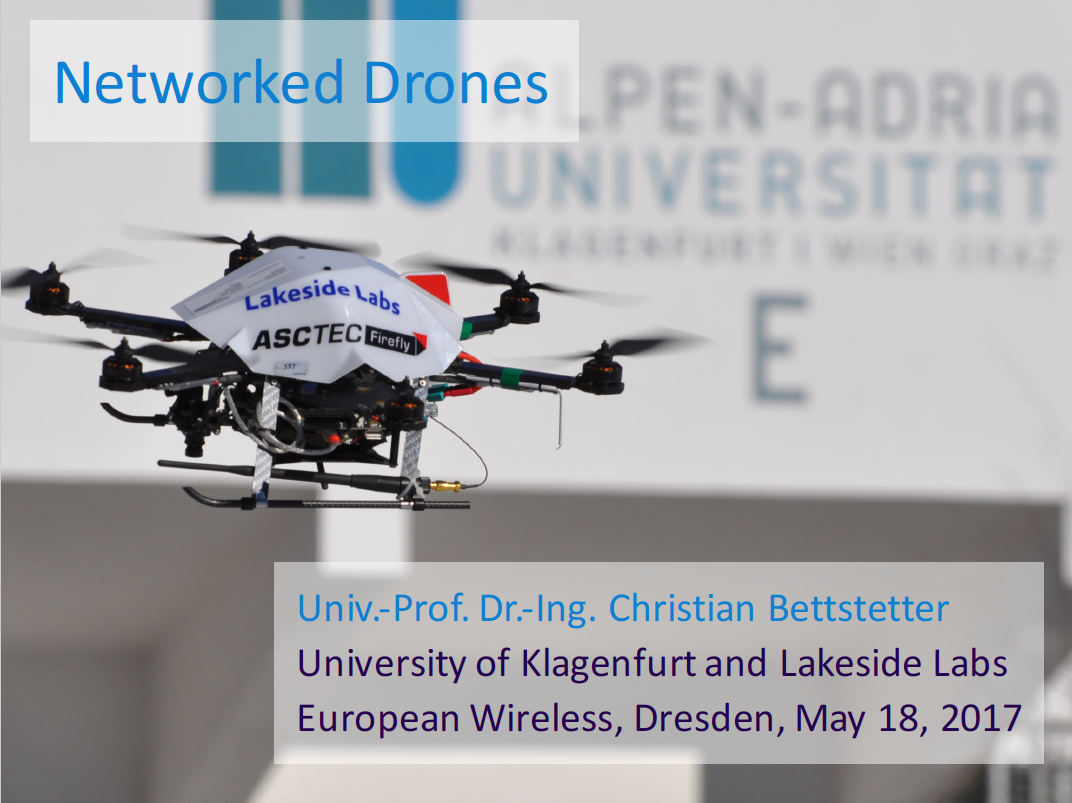 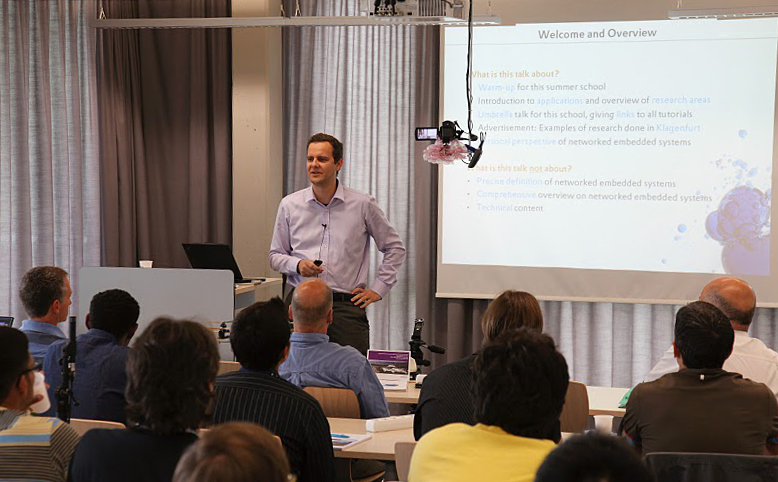 Swarmalatorbots: Robots that sync and swarm. Invited talk at Max Planck Institute for the Physics of Complex Systems, Dresden, June 21, 2022.

Further invited talks and lectures on self-organization and synchronization were given at Vrije Universiteit Brussels, TU München, Universität Passau and Universität Wien. 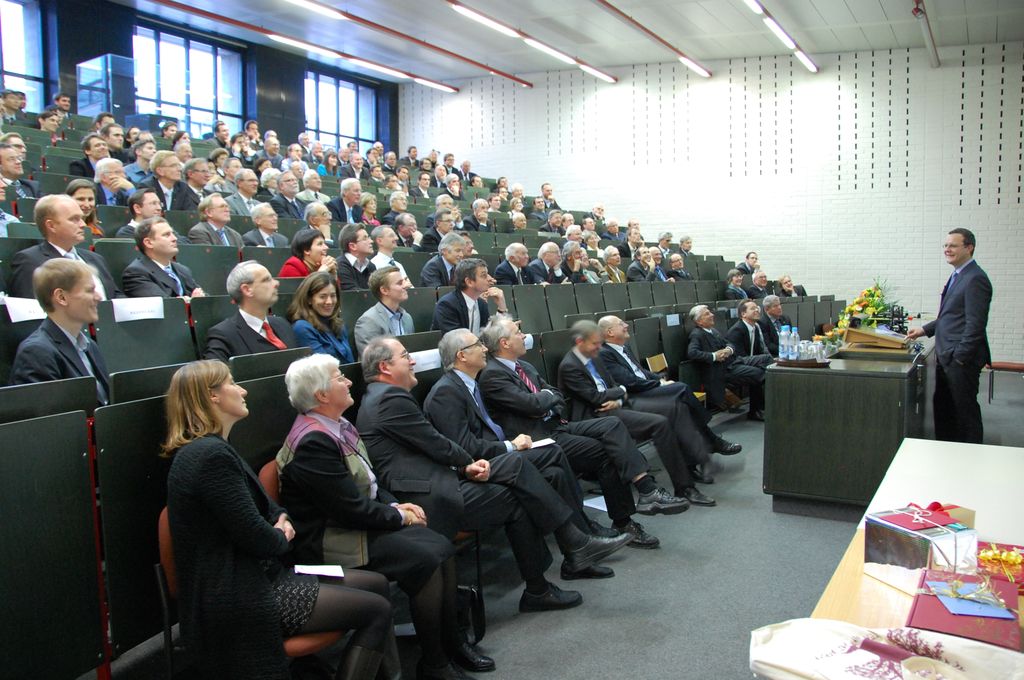 Networked drones: The hype is ripe. Invited keynote at European Wireless, Dresden, May 18, 2017.

Samira Hayat shares her personal experience with both military and commercial drones. “For me, technology is like a tool, you know. It does want the user wishes it to do,” she says. It is in the hand of humans “whether they go rogue or stay ethical.” She also quickly explains our research activities on networked drones in Klagenfurt. re:publica is an annual conference and exhibition on the digital society with about 9.000 visitors. A full stream of Stage 2 of Day 3 is also available.

“Drones can be used for many different purposes, but I believe that the transition of drones from ‘killing machines’ to ‘healing machines’ is truly in progress,” Samira Hayat says. In her TEDx at CERN, she highlights some application domains where drones act as human-friendly devices. CERN is the European Organization for Nuclear Research; it is one of the world’s largest research centers.

Wireless Systems: 5G and Beyond 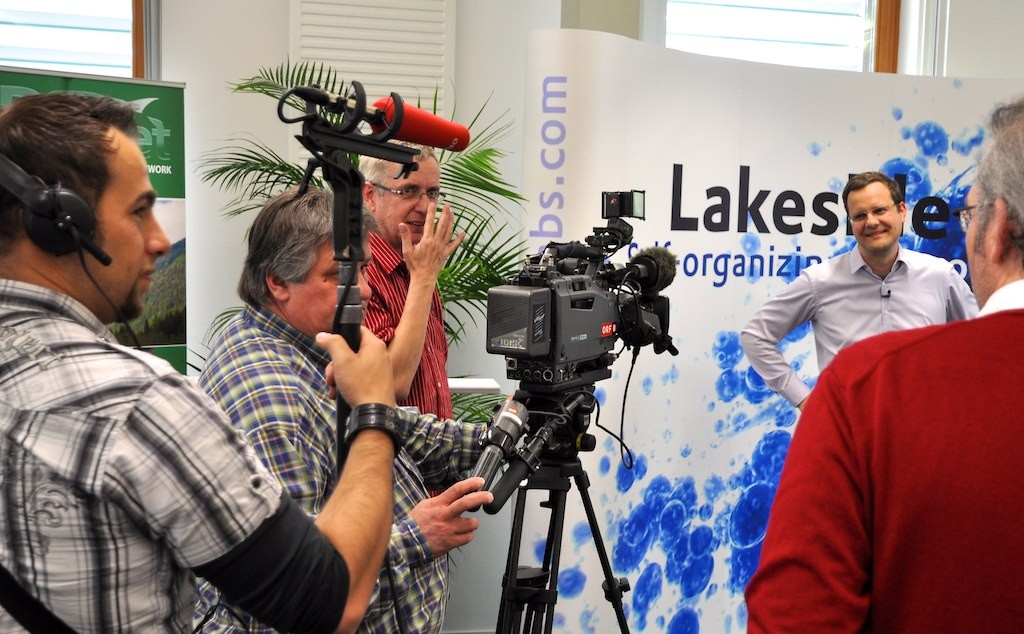 On collaboration between industry and universities. Infineon’s CTO, Reinhard Petschacher, and the two professors Mario Huemer and Christian Bettstetter discussed about the topic of cooperation between industry and universities. How does cooperation start? How are win-win situations achieved? What are sensitive issues in such collaborations? The discussion is part of the book Wissen schaffen, which illustrates the variety of research activities at the University of Klagenfurt. The panel was held at Infineon Villach, July 22, 2009. In German.

Laudatio for Johannes Huber. The University of Klagenfurt awarded an honorary doctorate to Johannes B. Huber (Erlangen). Christian Bettstetter had the honor to introduce him. Klagenfurt, November 17, 2017. 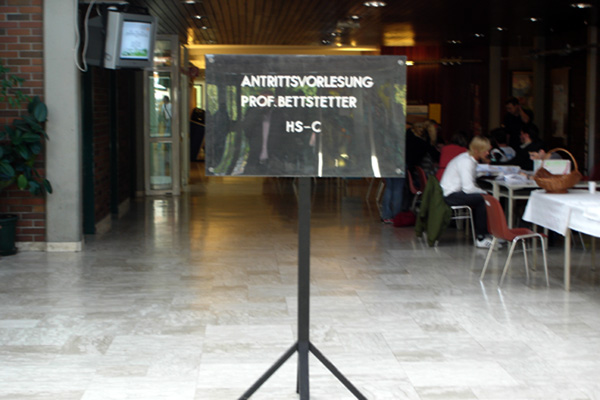 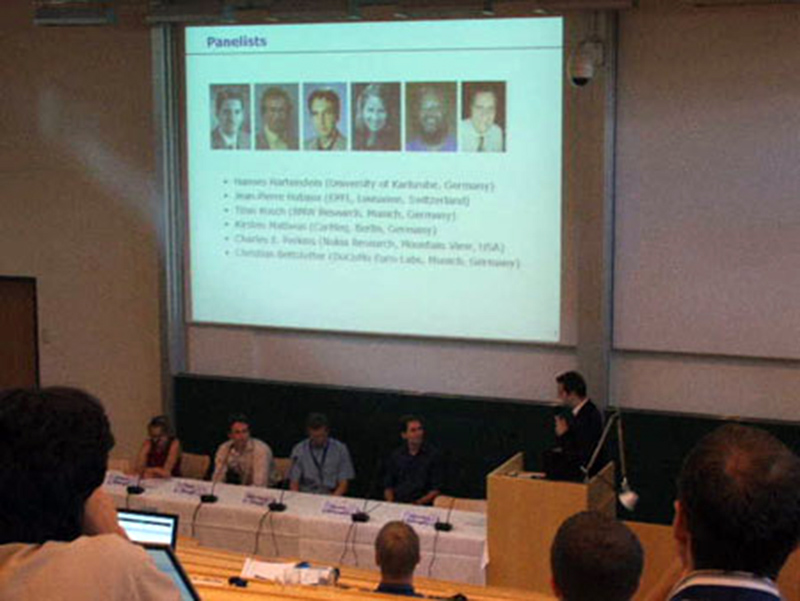 Selected events from the early 2000s for archival purposes:

Other talks and keynotes by Christian Bettstetter were invited by

Communication in swarms (2019): The 2019 Lakeside Research Days in Klagenfurt brought together experts working on communication and coordination in swarming systems. Invited keynote speakers were Heiko Hamann (University of Lübeck), Alcherio Martinoli (École Polytechnique Fédérale de Lausanne), and Sofie Pollin (Katholieke Universiteit Leuven). With about 45 participants from academia and industry from all over the world, the three-day workshop was sold out. The program included several group work sessions, a laboratory course on swarm robotics, a demonstration on search and rescue with multiple drones, and a barbecue event at Lake Wörthersee.

Swarming in cyber physical systems (2017): The 2017 Lakeside Research Days were held as a three-day interdisciplinary workshop on self-organization and swarm intelligence in cyber physical systems. Experts presented their work and discussed open issues in this exciting field. Keynote speakers were Nora Ayanian (assistant professor at the University of Southern California) and Gianni Di Caro (associate professor at Carnegie Mellon University). Two additional highlights were the presentations by Johannes Gerstmayr (professor for machine elements and design at the University of Innsbruck) and Thomas Schmickl (professor for biology at the University of Graz). The program also included laboratory sessions with training on micro-robots and talks from the Horizon 2020 project CPSwarm.