The way radio interference changes over time and space in wireless networks has significant impact on system performance. Bettstetter and his team gained novel insight on such interference dynamics using tools from stochastic geometry. Expressions for interference correlation and link outage in multipath fading and relay channels were derived. Future research addresses the prediction of interference with the objective to improve system performance.

Interference management has always been essential in the design and performance analysis of wireless communication systems. Simply put, interference occurs when communication between a transmitter and a receiver is disturbed by additional transmissions near the receiver, which can result in the loss of transmitted information. Interference management requires appropriate modeling and a comprehensive understanding of interference behavior — a topic we addressed in the project «Dynamics of interference in wireless networks» supported by the Austrian Science Fund from 2012 until 2017. As the project title says, our primary interest has been to understand how interference changes over time and space, and what the impact of such dynamics on system performance is.

The dynamics of a signal can be quantified in terms of its autocorrelation, which describes how similar two values separated by a time lag are expected to be, thus indicating how fast the power typically changes. «We succeeded in deriving expressions for the temporal correlation of the interference power in a variety of cases», senior researcher Udo Schilcher says. The impact of temporal correlation can be illustrated with the example of a retransmission protocol that sends a message again if the intended receiver was not able to receive the message due to interference. «Immediate retransmission of unreceived data makes no sense if interference persists. A transmission is more likely to succeed under improved interference conditions. Our results on the coherence time of interference reveal how long a sender should wait in order to obtain improved conditions with high probability,» Schilcher explains. 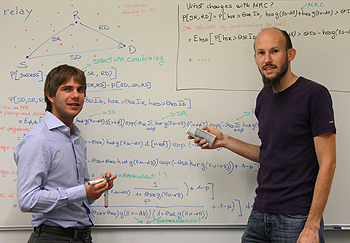 To demonstrate this scenario, the impact of correlated interference on the packet delivery rate in a cooperative relay network was analyzed, in which the receiver obtains the same packet from two different devices at two different time instances, thus exploiting space-time diversity. It was found that «temporal and spatial characteristics of interference play a significant role in shaping the system performance.»

The team was also able to derive the link outage probability in a wireless network with uniformly distributed interferers and Nakagami fading caused by multipath propagation. From a more general perspective, interference functionals and a variant of the Campbell–Mecke theorem from stochastic geometry were found.

More recent work derived the interference correlation in networks with carrier sensing and showed that, even though a commonly used approximation to carrier sensing may have the same average value of interference, the higher order moments behave significantly different. Last but not least, it was shown that the level crossings between low and high interference are not uniformly distributed over time but occur in bursts, in a certain setup with uniformly distributed nodes and random access.

The Klagenfurt group made an original contribution to wireless communications that greatly enhances our understanding of interference.