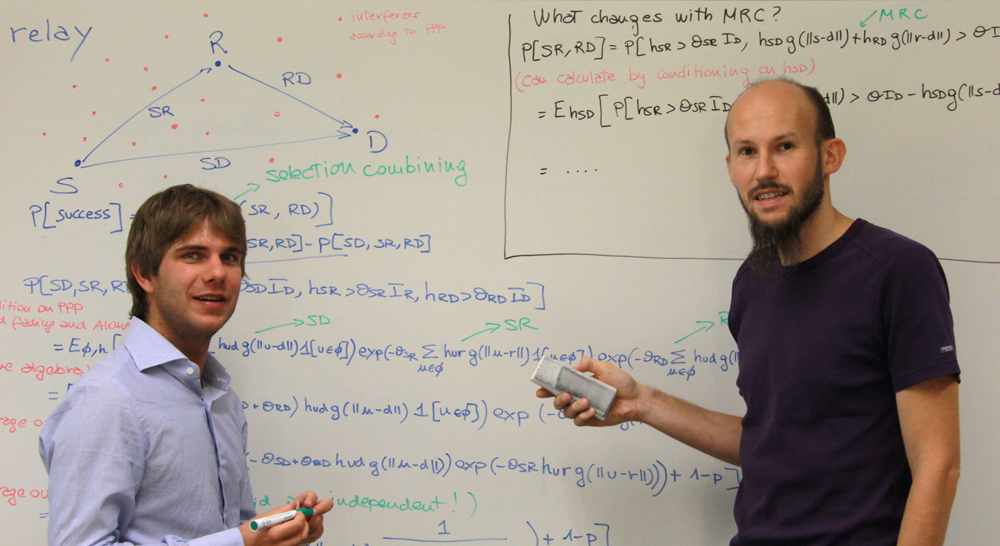 We analyze a wireless communication system with multiple relays operating in an interference-limited setting. Analytical results derived for different interferer placement show that the temporal and spatial characteristics of the interference have significant impact on the system performance.

Wireless communication from a sender to a receiver is significantly affected by the interference generated by other devices. If devices in the vicinity of the receiver transmit at the same time and on the same frequency channel, their signals interfere at the receiver with the intended signal from the sender and thus impede proper reception. Such co-channel interference has a huge impact on system performance. It limits the overall network capacity in terms of bit/s/Hz/m². Besides the average interference level, the time-varying and space-varying properties of interference should be considered for the design of communication techniques and protocols, and notably for temporal and spatial diversity schemes.

Along this line of argumentation, researchers in the FWF-funded project INDY under guidance of Christian Bettstetter (Klagenfurt) in cooperation with Stavros Toumpis (UAB Athens) analyzed the packet delivery performance of cooperative relaying in an interference-limited scenario. The results were obtained using tools from stochastic geometry. Alessandro Crismani, a postdoctoral researcher who joined the project in January 2013, explains: “If the wireless communication conditions between two devices are harsh, the temporal and spatial dependence of interference improves the packet delivery rate [compared to the case of independent interference]. In good channel conditions, however, dependence decreases the performance.” The researchers also compare different strategies for signal combining at the receiver.