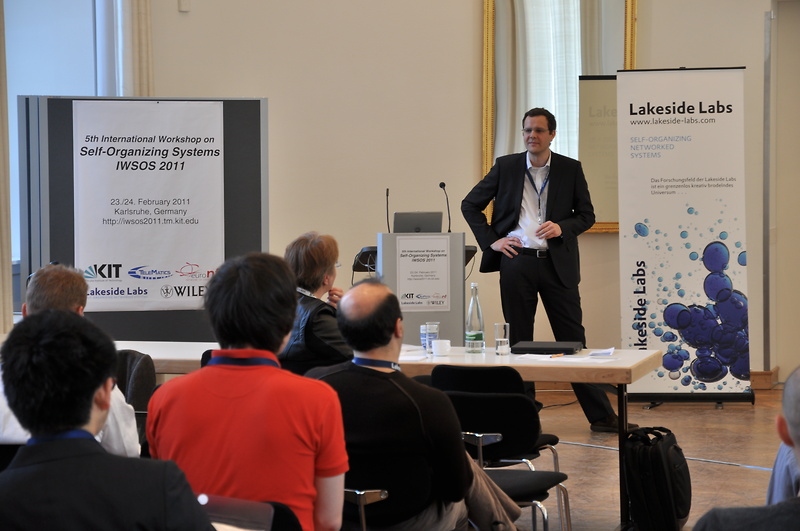 Aspects of self-organizing systems were discussed in a multidisciplinary workshop where I had the honour of acting as program co-chair. Two great keynotes were given by Hermann Haken and Hod Lipson.

About 50 participants from 16 countries attended the Fifth International Workshop on Self-Organizing Systems hosted by Martina Zitterbart and her team in Karlsruhe (Germany). The two-day event started with an exciting keynote address of Hermann Haken, a pioneer in the field of self-organizing systems. He outlined his work ranging from laser theory to information theory and pattern recognition to nano robots.

The workshop featured ten paper presentations in four sessions on the design and analysis of self-organizing systems, wireless networks, and peer-to-peer networks. Topics included evolutionary design, distributed clustering, self-localization, self-repair, and routing. All papers have been published in the book „Self-Organizing Systems” edited by the program chairs Christian Bettstetter and Carlos Gershenson. The best paper award was conferred on François Cantin and Guy Leduc from the University of Liège (Belgium).

In two poster sessions, 17 PhD students and PostDocs presented their work and discussed their ideas with fellow researchers. The award for the best poster was given to Helmut Lindner, who is a PhD student at Klagenfurt’s NES institute. Cornell professor Hod Lipson concluded the workshop with an inspiring keynote talk on „self-reflective machines.” He demonstrated several experiments with self-aware mobile robots that evolve ways to walk. According to Lipson, such reflective processes are essential for achieving meta-cognitive capacities. The ZKM, a center for art and media technology, provided a fancy setting for the social event.