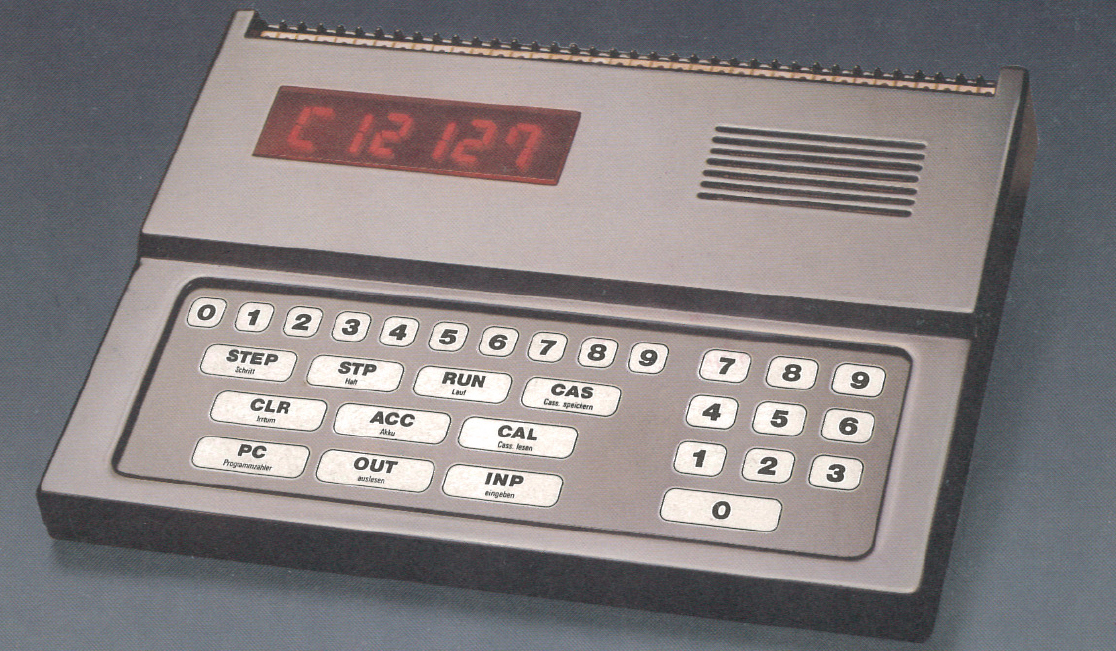 Read about my first computer and programming experience, share your own experience, and join the discussion about the best-suited tools for our kids to do first steps in programming.

My first computer was a Kosmos CP1. I got it from my grandmother at the age of 10 or 11. It had 21 different commands and was able to execute programs with 128 commands. I loved to sit in the “hobby room” of our basement and to code programs in pseudo assembler that triggered eight red LEDs to blink — sometimes like in Knight Rider’s KITT. I also bought a memory extension to upgrade the CP1 from 256 Bytes to 512 Bytes and an interface to store programs on audio cassettes. Most people in my neighborhood at that time in Germany did not pronounce the word “computer” in a correct way, but they said “komputter”.

Then I got a home computer, the Schneider CPC6128 with a green monitor. The CPC6128 was the main competitor to the more popular Commodore 128 in Germany. I learned BASIC and enjoyed games such as Sorcery with my friend Andreas Kahler, who had a CPC464 with a color monitor. My self-made first hardware upgrade was a reset button that I installed.

“It’s time to do something serious now,” my father said in the late 1980s, bought me a Schneider PC (AT 286) — an MS-DOS-based and well-designed mini tower with an Intel 80286 processor, 1 MB RAM, and a 42 MB hard disk. My beloved CPC was given to my younger cousin. I learned Turbo Pascal.

In the last years of high school, it was the time of setting together your computer from many different vendors by your own. I bought a huge tower, a 486 computer, hard disk, and a huge, heavy monitor.

When I started studying electrical and information engineering at TU Munich in 1993, we were confronted with a completely new world: HP Apollo workstations with UNIX. The Internet and the Web emerged, and the whole computer room packed with 60 students was playing xpilot and programming the Modulo 2 homework. These were my first ten computer years.

So, what was your first computer? How about your first programming experience? And what should we offer our kids these days? Is ScratchJr on the iPad and Android tablets the best choice for six-year olds? Or game-like educational apps like Lightbot, Move the Turtle, Daisy the Dinosaur, or similar ones? Or better start immediately with “Hello world!” using a Python interpreter on a real computer?

Hosted by the one and only RB