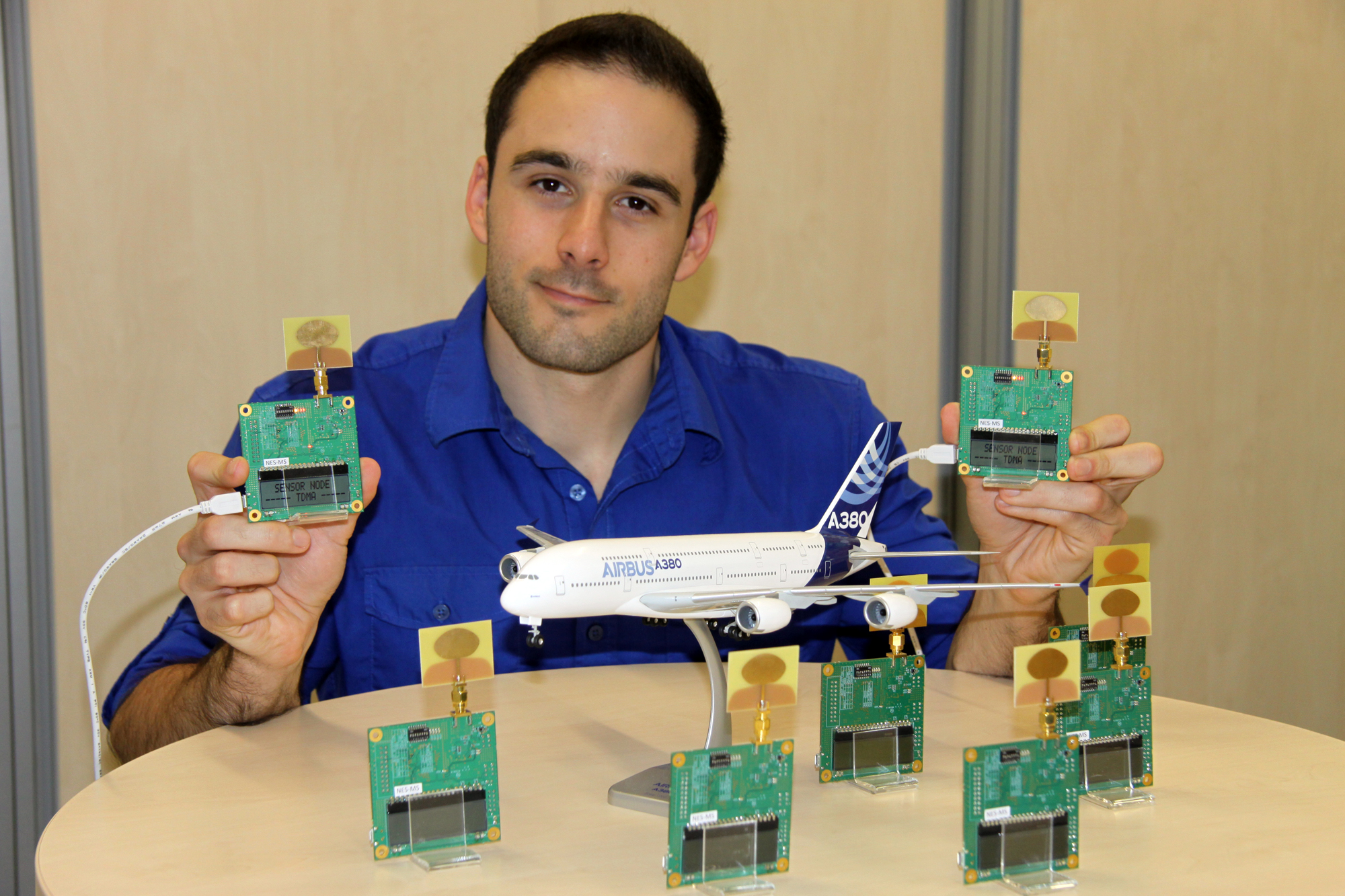 The airplane industry is interested in replacing heavy cables in aircraft by wireless connectivity. We are currently investigating the potential and feasibility of ultra-wideband (UWB) technology as an option for such systems.

Modern airplanes are equipped with hundreds of embedded sensors and actuators necessary for structural health monitoring, aircraft control, and passenger and crew assistance. These devices are typically interconnected by wires. Using wireless connections instead of wires improves flexibility of installations and reduces the airplane’s weight. Researchers from Airbus Group Innovations have been working on this topic for several years. An ongoing joint project with the University of Klagenfurt and Lakeside Labs develops and tests such in-cabin networks with focus on their robustness against undesired interference.

The researchers investigate ultra-wideband (UWB) communications—a technology that enables high data rates over short distances with low power consumption. UWB devices transmit short pulses, thus spreading the signals to be transmitted over a large bandwidth which in turn makes the connection robust against narrowband interference. UWB may serve as a complement or alternative to other wireless technologies currently under study for airplanes.

“We use IEEE 802.15.4-2011 compliant transceivers from DecaWave exploiting a bandwidth of 500 MHz,” researcher and doctoral student Daniel Neuhold says. He is very excited about his research: “I programmed a synchronization concept and implemented a slot structure in the network.” The team performs wireless measurements in a cabin mockup of a plane and evaluates the received signal strength with reference to the placement of the devices and the level of passenger mobility. The empirical cumulative distribution function of the received signal strength is computed from the collected measurement data.

Jirka Klaue from Airbus Group Innovations emphasizes: “In order to apply wireless communication in an airplane, the reliability of the technology must be secured. Theoretical studies and measurements in a real cabin are carried out. Experiments also serve as proof of concept.”

The basic ideas and first project results were presented at the International Conference on Embedded Wireless Systems and Networks (EWSN) in Graz (Austria) in February. Further experimental results were discussed at a student workshop at IEEE INFOCOM in San Francisco in mid April.

The text of this blog entry is based on contributions from all project members. Funding has been received from the KWF under grant 20214/26481/38805.

Daniel Neuhold giving a one-minute madness presentation of our poster at EWSN in Graz. pic.twitter.com/AwnxJV4GK3