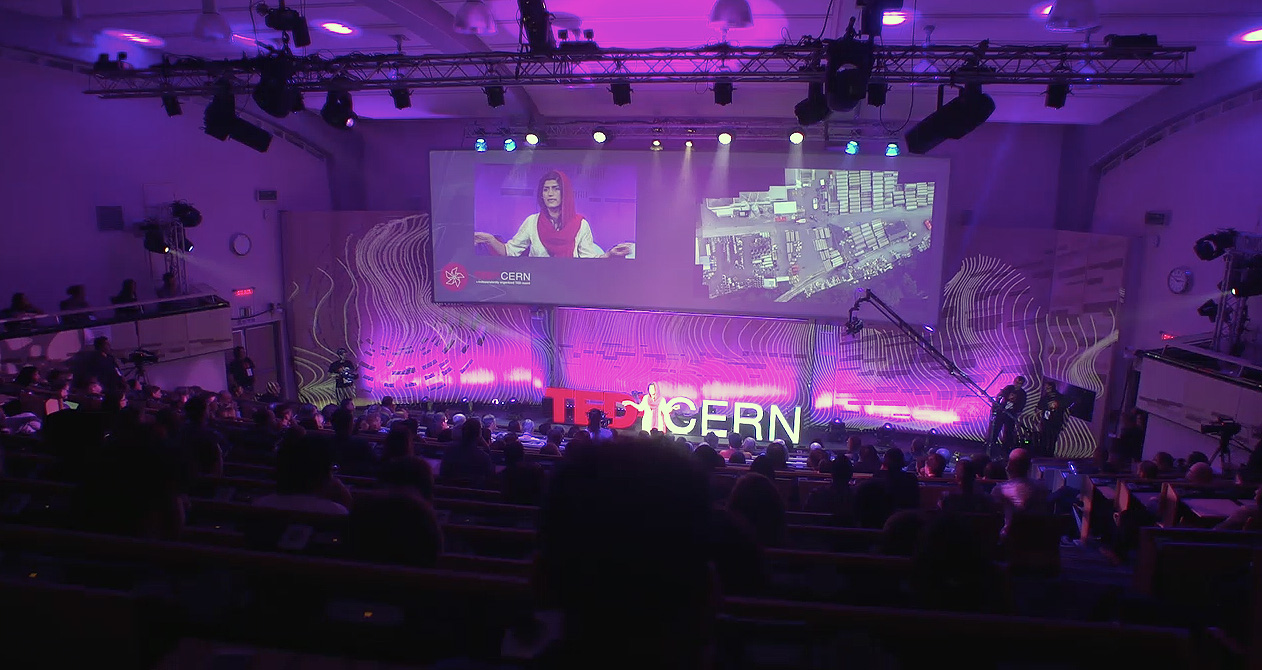 Samira Hayat from my team told her personal story at this year’s TED event at CERN and reported on our research activities in the field of multi-drone systems.

“One of my first memories relating to the word ‘drones’ is that of an online video of a man. He was angry and revengeful [and] told the story of how he lost his whole family,” Samira Hayat began her talk at the 2016 TEDx event Ripples of Curiosity at the European research center CERN near Geneva on November 5. Samira then shared her personal story: After studying electrical engineering in her home country Pakistan, she moved to Europe, did her master in Trento, and finally joined as researcher in my group in Klagenfurt for a project on self-organizing minidrone networks. “I remember what I felt and thought on the day that I got the job,” she says. “Instead of having the negative feeling … I was fascinated!”.

During her research she has often been confronted with the question as how to be sure that the technology she helps to design will not be used for evil. “I am working to develop drone networks for [..] life-saving applications,” she answers and compares drones with knifes. Knifes can be used for both good and evil: by doctors for life-saving surgeries and by murderers to kill. “It’s not the fault of the tool what it’s used for, it’s the fault of the hand using it,” Samira argues.

Her TEDx talk then describes the drone applications that our institute has been working on during the past seven years: aerial monitoring, delivery of goods, and search and rescue. “The research at our institute initially focused on visual coverage applications. Drones are used as aerial assistants, to provide aerial perspective for high definition imagery. Such high definition imagery can help in scenarios like firefighting … This way, the risk to the lives of the fire-fighters can be reduced.”

She then explains her own research: “My main focus lies in using commercially available drones for search and rescue operations. … Multiple drones collaborate to locate victims in a large area. … It is not only important for the drones to locate the victims in the shortest possible time, but also to relay this information to the ground personnel as quickly as possible. … In most cases the distance between the victim and the ground personnel is too large to allow connectivity. Therefore, the other drones in the system that also receive the location information of the victim collaboratively place themselves between the victim and the ground personnel to enable connectivity.”

“I can now answer the question I asked myself when I got this job,” Samira concludes. “Will this future finally become real? I can say “Yes, the fascinating, impossible seeming future of the sci-fi movies is becoming real. … I would like to invite you to step into my world. Let’s all imagine the story of the father carrying his four-year old daughter for first aid medical relief, but this time, with the drones dropping first aid boxes rather than throwing bombs. These possibilities are just the start of a promising bright future where drones are healers and not killers.”

Cover photo made as screenshot by Christian Bettstetter and used on this Website with kind permission from the organizer of TEDxCERN.

"These possibilities are just the start of a promising bright future where drones are healers and not killers." -Samira Hayat #TEDxCERN pic.twitter.com/CwwaSgDkm3

TED is a conference series under the slogan "Ideas Worth Spreading". Well-known people — including Steve Jobs, Jamie Oliver, and Stephen Hawking — talked at TED events. TED talks about drones include those by D'Andrea (2013, 2016), Kumar (2012, 2015), and Raptopoulos (2013).
The TEDx program allows organizations to independently organize events in a similar way as TED conferences are held.
TEDxCERN is an annual event organized by the research center CERN. All talks of the sold-out 2016 event were broadcast live over the Internet and offered by over 80 public viewing partners worldwide.