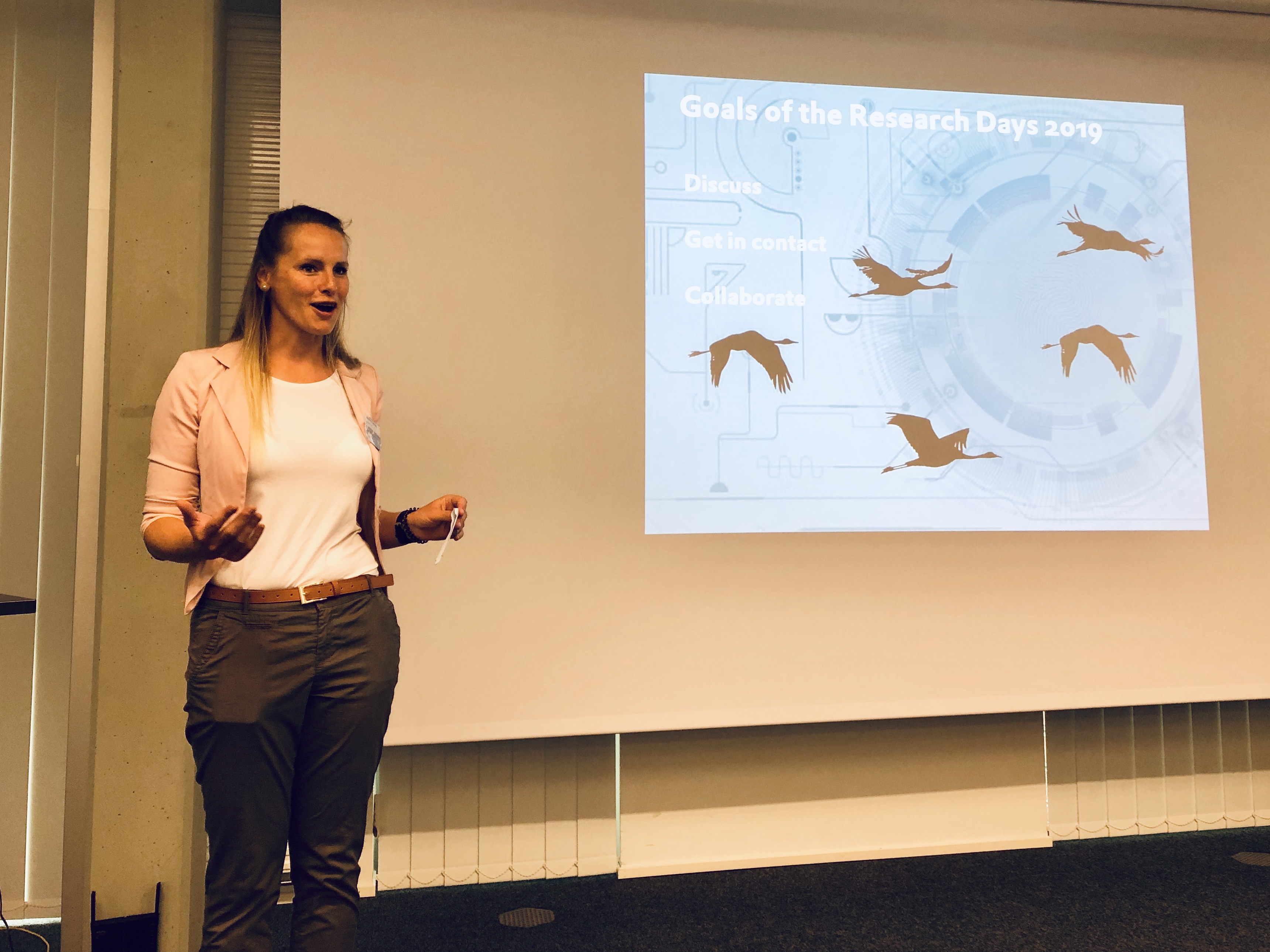 A workshop about communication in swarms took place in Klagenfurt in mid-July. Invited speakers and other experts discussed questions at the interface of robotics, distributed systems, and communication technology.

Nature knows numerous fascinating examples of swarm behavior. Be it flocks of birds, shoals of fish, or social insects — many animals coordinate themselves in a self-organizing way and thus inspire researchers to develop similar coordination algorithms for technical systems. Communications among the individual members is a key aspect for swarm behaviour to evolve. How it works was the topic of the 2019 Research Days on Communication in Swarms, a three-day workshop organized by Lakeside Labs, which brought together some 40 international researchers from different fields of academia and industry.

The opening keynote was given by Heiko Hamann. The professor for service robotics at the University of Lübeck in Northern Germany presented work on bio-hybrid systems — a combination of robots and living organisms. He is interested in the issue of how performance in swarms scales with size: “What’s a system’s maximal scalability? … is the main topic of this talk,” he said. Hamann explained, for example, how physical and communication interference as well as contention can impair the size and performance of a group.

Alcherio Martinoli from École polytechnique fédérale de Lausanne (EPFL) also gave a robotics perspective on the topic. He talked about “forms, strengths, and limitations” of distributed robotic systems and the role of communications therein. In spite of giving examples from biology he stressed that one should “go beyond pure bio-inspired engineering [and] keep in mind that our technology has advantages and drawbacks.”

The third keynote was devoted to unmanned aerial vehicles (UAVs), which became a booming topic with applications in many domains. Having a background in wireless communications, Sofie Pollin became interested in aerial vehicles when she joined the faculty of KU Leuven in 2012, where she leads the networked systems group. Her talk covered UAV applications, communications and sense-and-avoid technologies for autonomous flying. Amongst others, she presented recent results on the communications performance of airborne UAVs connected to Long Term Evolution (LTE) cellular networks.

The remainder of the workshop was dedicated to discussions and group work. “One of the key factors of success is the intense work within small groups of participants,” Melanie Schranz, one of the organizers and senior researcher at Lakeside Labs, says. The event provides the opportunity to exchange ideas and initiate collaborations. Besides, there was also time to socialize and relax during a boat trip on the beautiful lake Wörthersee and a barbecue at the lakeside. The event closed with a demonstration of a UAV swarm in a search and rescue mission and a workshop on robot programming. Research collaborations, joint papers, conference special sessions, and proposals for European projects bear witness to previous Research Days.

The organizers would like to thank all participants for their great commitment during three exciting days. They also appreciate the assistance of the University of Klagenfurt as well as the financial support from Infineon Technologies Austria and the faculty’s alumni club. The next Research Days are expected to take place in the summer of 2021.

Exactly what I needed: 3 days of swarming with engineers! Thank you, @lakeside_labs–the #resdays19 experience was nothing short of amazing. Can’t wait to come to Klagenfurt again (and again)!@melanie_schranz, you’re the best! 🙂

Thanks to @SofiePollin for her excellent talk at #resdays19 on drone applications, drone communications, and sense and avoid technologies. Interesting insights, well explained. pic.twitter.com/XfOTYvKbsp